Cape Town has 82 beaches in total. It is a peninsula meaning that Cape Town is an almost island surrounded by the coast on three sides. Travelling to Cape Town means you have to visit at least one beach. I’m crazy about the sea and I even love the soft beach sand which clings to absolutely everything. Given my mermaid-like obsession for beaches I figured I’d write on the beaches in my city.

The coast is divided into three territories. False Bay it’s super close to where I stay like 5 minutes walk and includes Muizenberg, St. James, Fishoek and all the beaches of Simonstown, this side tends to have warmer water if you plan on swimming the water is milder along this stretch of the ocean. It’s 6 degrees warmer than the other coastlines making it better suited to swimming. Then there’s the Atlantic Seaboard where my sister lives packed with beaches perfect for windsurfing as the West Atlantic side of the peninsula sees windy conditions often.  Lastly, the West Coast beaches which run Northwards from Cape Town which included beaches such as Langebaan.

This is a trendy beach lots of locals, tourists and celebrities flock to Camps Bay. You can walk your dog, play beach volleyball, tan or just soak in the views of Table Mountain and the Twelve Apostles mountain range. There are many impressive restaurants along the road from which you can people watch and enjoy the beach views if you’d rather not swim. Overall I get why Camps Bay gets mega full during peak summer season it is a great beach and the food options are awesome too.

Clifton is actually comprised of 4 beaches there are white sand huge boulders which help block the wind. Any of the four is great to visit. Though I tend to not go there that much.

Is a bit far away from the city centre. But, it is a pristine beach with soft white sand and icy blue water. There are no restaurants close by so do pack something to eat. It’s a perfect sunset-watching spot and usually far less crowded than Camps Bay and Clifton. 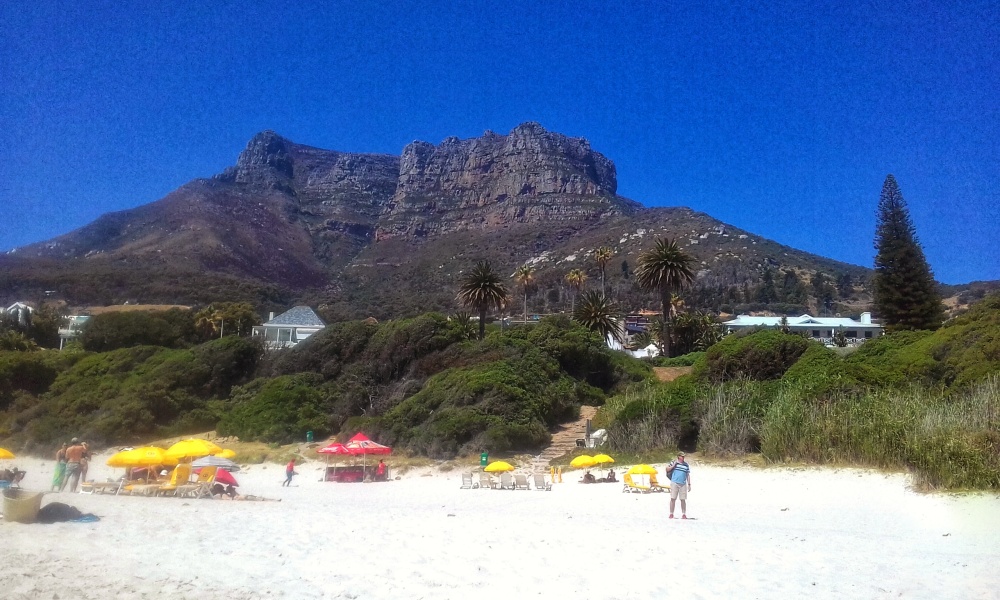 The picture-perfect spot to take photos of Table Mountain this beach has a number of restaurants nearby. It is also windy enough for kite surfing, surfing and other water sports but, mild enough to still have a great time without the beach sand hitting you in the face.

This beach is close to Blaauwberg and has a collection of lovely restaurants where you can indulge in delicious food whilst watching the waves. There also happens to be a cute mall with a collection of shops with interesting items there’s a gift shop close to the Pick n Pay, a shop that sells Boho inspired clothes, swimwear etc and a curio shop which sells wax print clothing, laptop cases, books and more. There’s also a massive frame which just begs you to take a photo in front of it located at an Instagramable spot you won’t be able to miss.

The go-to surfing spot with amazing restaurants such as Easy Tiger, Tigers Milk and Knead. Muizenberg is best known as surfers central and the beach with the colourful beach huts. The beach huts have made Muizenberg an Instagrammable spot. During summertime there are also Lifeguards on duty included trained shark spotters. If you hate the sand at the beach you can swim in one of the pools although you have to pay an entry fee to swim there. For thrill-seekers, there’s a water slide. There’s a kids park close by and a putt, putt course. And if you walk a bit further away you will find the pretty public park. Muizenberg also has a cool little book shop called Paper Moon. And finally, if you walk for about 24 minutes along the catwalk from Muizenberg you will find St. James. 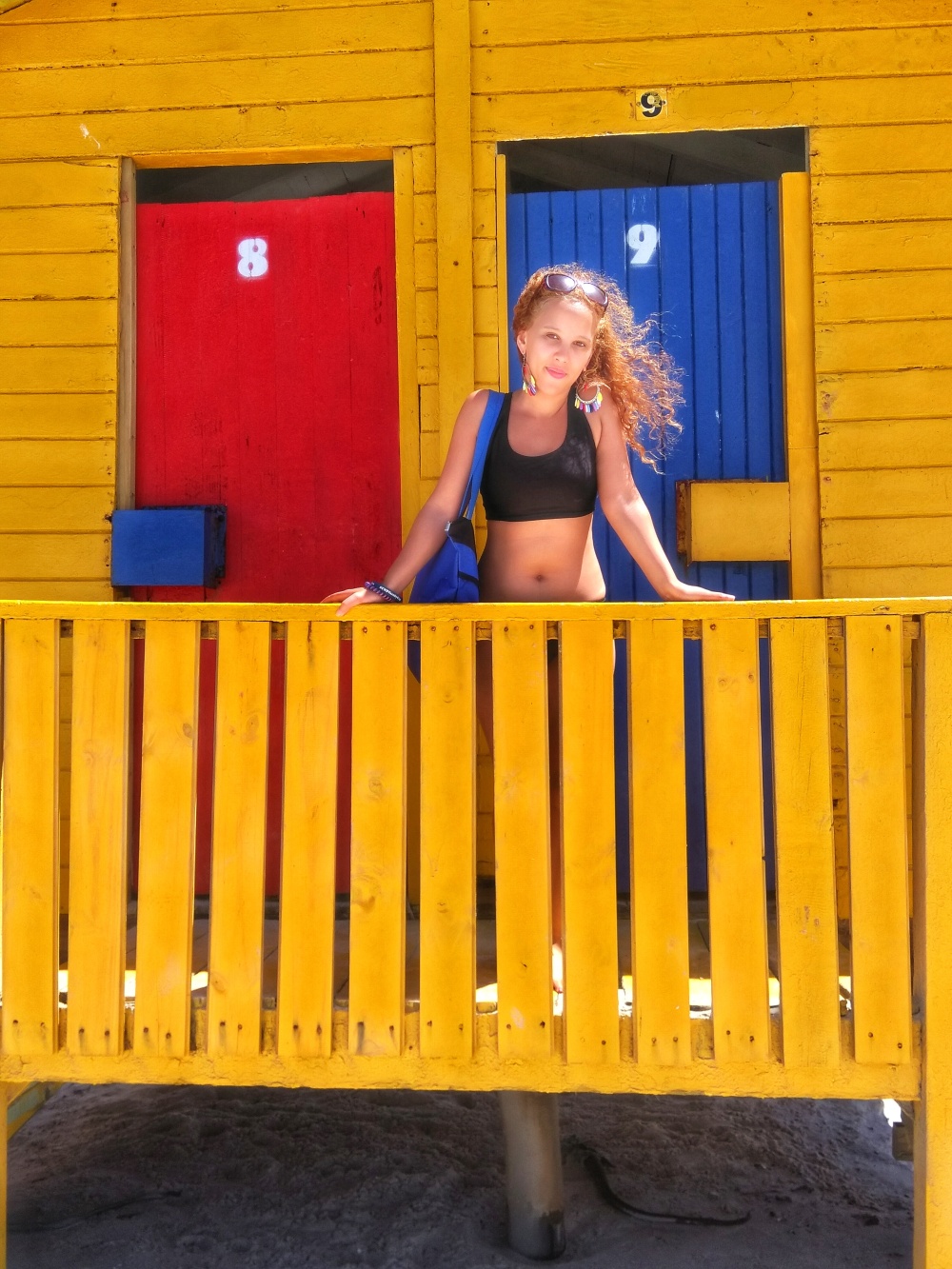 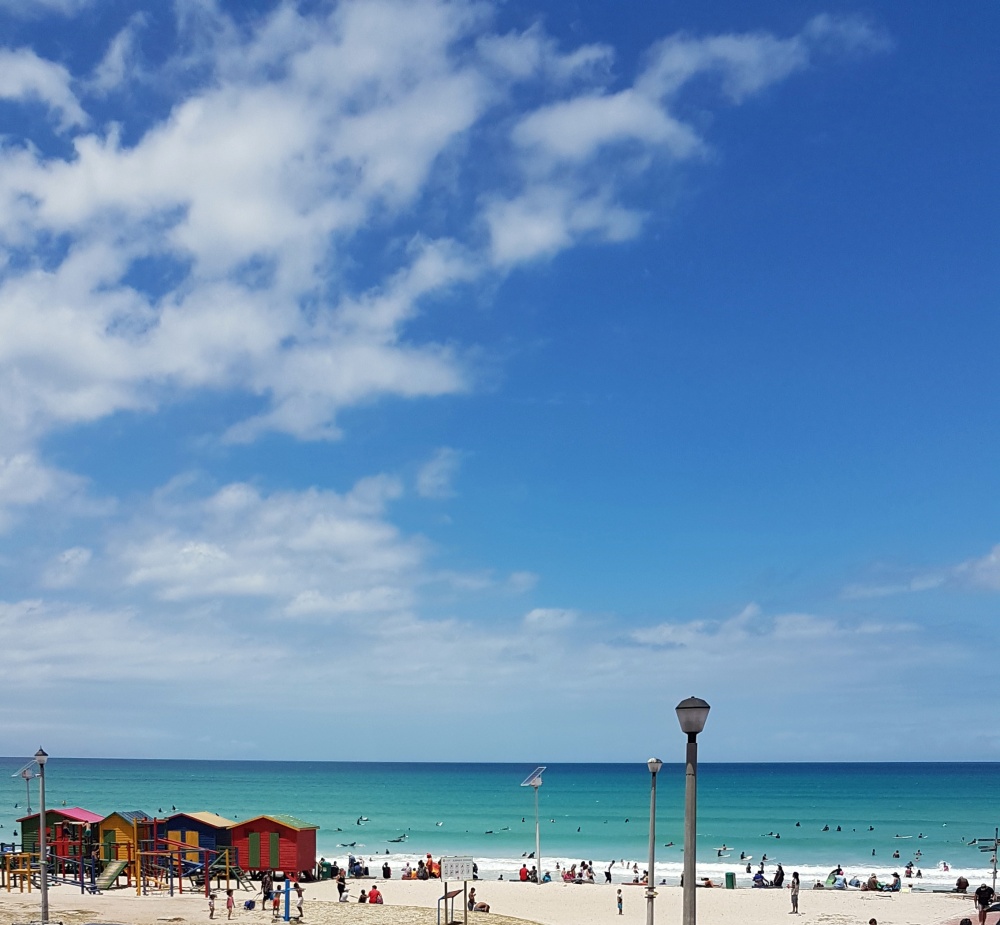 This is a smaller beach compared to Muizenberg but it does feature a tidal pool. It’s rocky at the bottom but, it can be nice to swim in especially when the tide is lower. St. James also has colourful beach huts but, there aren’t lots of restaurants lined along the beach. I often travel to Muizenberg and walk to St. James it’s super close by and if you follow the catwalk you won’t miss it.

This small seaside community bustles with fishermen at the harbour where you will find seals and Kalkys one of the most affordable seafood restaurants which serve the catch of the day. There are many cute boutique stores and a wonderful book shop. Kalk Bay even has a tiny beach a train line, and a theatre. Cape to Cube is a popular restaurant slash bar which comes with beach sand floors and indoor swings.

A great beach to take a beach walk on as it stretches a bit further. Close by you will find Spur and KFC along with lesser-known restaurants. There’s a play park for kids and lifeguards are normally on duty. I spotted a whale at this beach last September and saw a number of kayakers.  If you’re planning on visiting the False Bay beaches this one tends to be less full than Muizenberg. However, on certain days like the 1st of January almost all Cape Town’s beaches are full. 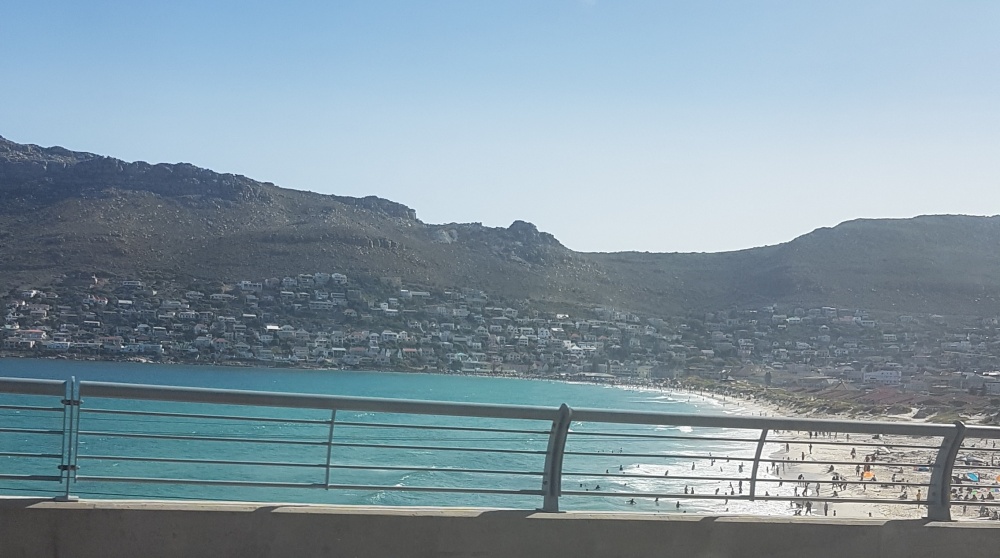 There are many locals who don’t know about Seaforth. It’s the lesser-known cousin of Boulders. At Seaforth, you might also spot penguins that are protected behind a barrier with a San Parks ranger on duty. People have stolen penguin eggs in the past and so now there’s more protection. At Seaforth, there’s a beautiful restaurant. There is now a little market where you can buy jewellery, clothes and other keepsakes. And you can rent a kayak and paddle with the penguins. The beach has trees and a grassy area perfect for picnics. There are also many boulders creating a tidal pool like effect and the beach stretch is cove-like shaped which often protects you from the wind. Do note though that at Seaforth there aren’t any lifeguards on duty.

This is one of the few beaches in Cape Town where you have to pay to enter. Boulders are home to a thriving African penguin colony. All proceeds of the entry fee are used to conserve these endangered, adorable birds. Tourists and locals alike are allowed to swim and take photos with the penguins. Please note though that you should keep a distance of 300 meters between you and the penguins. But, if the waddle right up to you it’s totally fine to take photos just don’t chase them down.

My brother is a fan of Strand. It also is dotted with wonderful places to eat. It’s a relatively big beach and the wind tends to be mild. For me, however, the water is icy cold. It’s a beach I never swim in but it’s great for walking with my feet in the water and taking beach walks.

Situated close to the harbour you might spot the chubby seals. Houtbay is where I often did beach cleanups in primary school. It also has a fantastic restaurant, the Mariners Wharf close by from it you can see the pretty beach. And the food at Mariners Wharf has never disappointed me. I don’t even love seafood but, I make the exception for seafood served by this restaurant. Houtbay also has a number of other restaurants, a market operating on Saturdays and you can take a trip to Seal Island from there.