Kings Day is a day which celebrates the Kings birthday in the Netherlands. It used to be Queens Day but, has been changed. The day started off as a day to  honor the birthday of Queen Wilhelmina  in 1885. After her daughter Juliana ascended to the throne the date was changed to the 30th of April. When Queen Beatrix became the queen she wanted to keep the day going. However, her birthday is in January when it’s still cold outside. It’s not the ideal weather conditions for a outdoor party so she kept the April 30th date. When her son King Willem-Alexander ascended  he changed the date to his birthday, the 27th of April. Kings Day seeks to celebrate House of Orange-Nassau, the Dutch Royal Family.

I visited Amsterdam with a few of my classmates for Kings Day in 2016. We were all international students as the German student’s weren’t prepared to bunk a lecture to go to Kings Day. This was the only time I skipped a lecture for fun. And it was so much fun. I love the Netherlands and the atmosphere was contagious. Dancing on the street people smiling and laughing was all over the place. Kings Day is celebrated all over the Netherlands and it’s a national holiday. Because I lived in Essen it was easy for me to take a student travel bus to get to Amsterdam for the day. I didn’t stay overnight as I got back to Germany at around 3 am the next morning.  Before I went I asked my Dutch friend Monique for tips. I also did a bit of research, so I’m sharing what I learnt. Here are a few tips on how to survive Kings Day.

Don’t get the date wrong

The drawback of guide books is that once printed they are forever. Dates don’t change and information can’t be updated unless you buy a new edition. Some tourists still get mixed up with the dates  and end up visiting on April the 30th.

Everyone is going to wear something orange the Netherlands has a nicknamed which loosely translated means the orange kingdom. The national soccer team wears an orange kit. On Kings Day Amsterdam becomes a sea of orange.

Create a meet up point

The crowds are gigantic as the streets become a massive party lane. People dance and drink all over. It is loud and busy. If you don’t want to lose your friends stay close to them. Hold hands of you must. As a backup measure create a meet up point where you can meet your friends if you do get lost.

Drinking on the streets is totally legal on Kings Day. You will see locals and tourists doing it. You are only allowed to have one alcoholic beverage on your person. A six pack of beer counts as more than one. Police are allowed to check your bags and will confiscate your alcohol. Instead buy a bottle and share it among friends buy paper cups. Or have a friend who doesn’t drink that much carry your extra beer. There are also beer kegs at outside dance parties and you can buy from beer on the street.  Supermarkets also won’t sell you a lot of liquor I remember me friend being able to buy two beers one of himself and the other “supposedly for me”.  Do know that many people break these rules but, if it’s confiscated it’s your loss carrying more liquor is a chance you take. Remember that if you are sailing a boat you aren’t allowed to be drinking so find a sober captain somewhere.

I highly recommend the street food or basically any other restaurant than the steak ones. Dutch people honestly don’t eat Argentine steak in Amsterdam. And I can’t figure out why tourists would want to eat Argentine food in the Netherlands. Rather try a stroopwaffle, pannekoken, bitterballen, fries , croquettes, the cheese, poffertjes, stamppot and the sweet or salty liquorice. You will find the liquorice sold in most supermarkets the salty one is a bit strange. Then there’s the Indonesian rijstaffel (because of the strong influence of Indonesians’ you can get authentic Indonesian dishes).  All of these options are much better than eating at places which are specifically geared at tourists which tend to offer only waffles and Argentine steak.

Eat breakfast, have packaged snacks and eat lunch. Take water with to stay hydrated. If you are going to be drinking you will need to be feed as drinking on an empty stomach is dangerous.  One of the people in my group a friend of a friend had a bit of a bad trip because he didn’t eat that day but was drinking and smoking a lot. Luckily he stayed in Amsterdam and it wasn’t that bad that he needed emergency services.

Don’t pee in the canals

I have said this before just don’t pee in the canals. You can now get a hefty fine if you do. Peeing in canals is part of the reason why the Dutch are tired of tourists visiting Amsterdam. Help preserve the city and change this negative view by peeing at one of the many temporary public toilets.

You aren’t allowed to swim in canals. Then again why would you because people do pee in the canals. Especially on King’s Day it will basically be a gross urine bath.

Don’t expect to do touristy things

Many of the museums are closed on Kings Day. Those that are operating are full. Plan your touristy stuff around the day and rather dance in the street like a local. You can visit the sites from outside like I did to pass time just don’t expect to go museum hopping on a day set aside for party hopping.

Partying on a boat on King’s Day just seems ultra fun. I choose not to do it as being a student means working with a tighter budget. If you want to enjoy a boat party remember to book well in advance these trips get pretty full fast.  Some of the canals have one way rules do some research to find out which and follow the rules if you plan to hire and operate your own boat.

There are many people selling second hand and new goods on Kings Day. There’s a children’s market where kids sell anything from books, toys, clothes and more. This market closes earlier. You will also spot adults selling things at random places in the city.  To buy things you will need cash and in smaller bills. If you don’t feel like forking out cash wait till 5am and then people will give their things away for free.

Alternatively if you want to sell things you can. Just don’t sell liquor or perishable food items. Drugs are obviously off limits too. You are allowed to sell clothes, second hand household goods, books, stationery, original DVD’s and CD’s no knock offs but yip an array of things are sold on Kings Day. Don’t block streets or entrances. In the city centre, South and the West Districts there are some limits on where you can sell your goods.  You will see people sitting with their stall so the best bet is to follow their lead.

Be careful of pick pocketing

Given that the crowds are enormous it’s easy to be pick pocketed. So stay very aware.

There are many parties along the streets. You will be dancing and walking around visiting different parties. I walked so much. I also ended up in a gay bar for a bit which was fantastic but, so full. We walked from party to party. And saw a few Amsterdam spots as well as the Children’s market, a concert, a few street dance parties, went to a coffee shop and the gay bar. This is besides going to the supermarket twice to get alcohol and the walk to get some food. Then there was the rather long walk back to the bus to get to Germany.

The weather in April in Amsterdam and the rest of the Netherlands is unpredictable. Some times on Kings Day its bright and sunny. Other times it can be colder. On the Kings Day I attended in 2016 it was a bit cloudy and colder. I wore a thick jacket and boots with stockings. Don’t wear a light denim jacket thinking that the sun is out it must be warm.

Amsterdam allows you to smoke marijuana illegally but, only inside of coffee shops. There are signs on the door showing you where the coffee shops are. Plus it clearly says coffee shop on the signs. A café’ is where you go for cake and coffee. A coffee shop is a licensed marijuana selling establishment.  On Kings Day the police tend to ignore outside weed smoking in the streets. But, be warned you can be fined for it if the police person chooses not to ignore it. Remember you can’t always smoke a cigarette in a coffee shop its illegal. You also can’t drink alcohol in a coffee shop there’s a law against it, one vice at a time.

Remember to charge your devices and take a portable charger. The first time I took a solo trip I visited Amsterdam in 2015 I wasn’t well prepared. My camera died and I only managed to take a few bad photos. Fast forward to Kings Day in 2016 I did much better nothing died.

Don’t use your car to get to Amsterdam it will be a nightmare. The roads will be full; parking will be a hassle your best bet is public transport. Do some research as public transport is limited during Kings Day especially in the central city which happens to be where many of the street parties are.

The free street parties, the market and street beer selling all ends at 8pm. That means that the free section of Kings Day is over. After that you can go to a club or event , you will be charged a cover charge. Personally a whole day of partying was enough for me so I left at around 9pm when the student bus left. The streets got empty and even the Red light district was almost empty. It’s probably a good time to take night time photos of the city.

Getting wasted on Kings Day is typical. But, I never get drunk whilst travelling. On my first trip to Amsterdam I was groped on the bus on my way to the city. On that same trip a guy tried to talk me into walking into a deserted street and a strip club. Being a woman who also looks very young and is petite can be a disadvantage whilst travelling. The thing is being intoxicated makes you vulnerable and the reality is that it makes men vulnerable too. You are more likely to make bad decisions, to be taken advantage of and be pick pocketed when you are drunk. There are lots of police officers on Kings Day patrolling but, they can’t be everywhere.  Be careful and have fun without losing your passport or being arrested for swimming in a canal.

And that’s it for now. Have you been to Kings Day? did you love it or hate it or would you like to go let me know. I would love to hear from you. 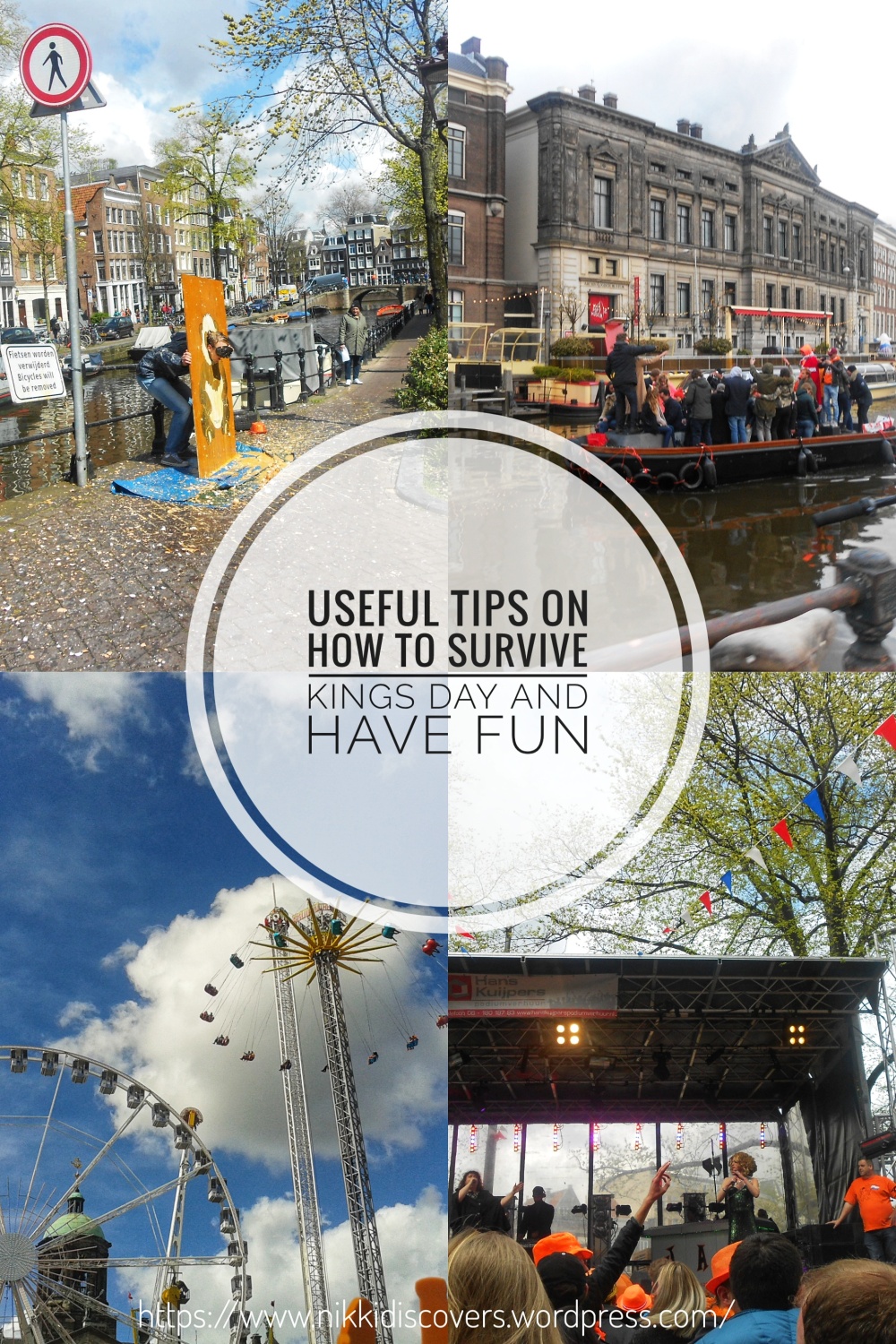