Vienna is steeped in so much history. It has been a political juggernaut city and has gone through phases of great development and decline. I learnt so much about Vienna on my trip which only allowed me to stay for one day. There are Baroque styled buildings and castles which house exquisite artworks in both graphic and musical form. The Viennese love sipping on coffee which is evident when you see all the coffee cafes along the cobblestoned lanes. Learn more about Vienna’s history and it’s hot spots in this post which is ideal for travellers who only have one day to spend in this magnificent city.

Vienna‘s history can be traced to its 500BC Celtic settlement roots. The first century AD saw Vienna becoming a Roman frontier named Vidobona. The Roman remnants remain a part of Vienna’s architectural landscape. Traces of Roman influence are particularly evident in the city centre.  During the Middle Ages Vienna became a notable trading capital established on the amber and salt routes.  The Habsburg Dynasty brought cultural and economic progress. Maria Theresa’s governance played an important part in the history of Vienna. Under her reign Vienna become renowned and alluring. Vienna became the capital of the Austro-Hungarian Empire in the 19th century and became a leading city in economic, cultural and political affairs. The golden years of classical music were in full swing, the arts flourished. Industrialization and immigration led to mass expansion. And in 1910 Vienna became the 6th largest city on the planet.  The Austrian-Hungarian Empire collapsed after World War I ended in 1918. Socialism rapidly spread. In 1938 Hitler declared from the Hofburg balcony that Austria would be ruled by Germany. Vienna’s large Jewish population endured suffering. They were besieged by the state and anti Semitic citizens. Jews were killed during the Holocaust. Mass destruction of Vienna took place during the Soviet advance from 1944-1945. The city centre is a World UNESCO Heritage site which was rebuilt during the 1960’s to 70’s period. After the war Vienna was divided amongst the US, UK, France and the Soviet Union like Berlin was. The city centre itself was a international zone and power was transferred to a different occupying nation every month. In 1955 Vienna became independent.  The 70’s saw a renewed political revival as many international organizations based their operations in the city this includes the OPEC, different UN agencies and International Atomic Energy Agency to name a few.  Walking around Vienna you will see many images of Klimt’s paintings, Mozart and of Maria Theresa. The fact that Hitler was Austrian is downplayed which is logical. It would put a damper on the tourism industry. However, we are doomed to repeat past mistakes if we don’t know our history. Vienna is certainly steeped in rich history, a past of flourishing and great pain coexists. Today the city is renowned for its museums, art, monuments, coffee café’s, and concert halls.

My next stop was the park. It was scenic with its lush green manicured lawns. There is a really lovely statue of Mozart in the garden.  And because I arrived so early the garden was empty. It is peaceful to stroll in an empty park. The treble clef  in front of the statue of Mozart  is something I thought was original. The garden was created in 1818 for the emperor. The park was opened to the public after the Hapsburg Empire fell . There’s a glass palm house called the Palmenhaus in the Burggarten and here you can go see butterflies and bats, what a combination.

The Cathedral has fine looking roof tiles. It stands tall and inside there was an exhibition being held.  St. Stephen’s Cathedral is often called “Wiener Steff” (Little Stephen in Viennese). The church overlooks Stephansplatz ( Stephens Square). St. Stephen’s can be found in the heart of Vienna. The Pummerin is the largest bell of the cathedral. It weighs 20 tons. It happens to be the second biggest free running bell in the world after St. Peters bell in Cologne, Germany. St Stephens was first constructed in 1147 in the gothic design and later under the Habsburg reign it was extended using the Romanesque design elements. Like most churches in Europe it’s free to enter.

The murals inside of the Dominican church are vibrant. Yet this church isn’t as popular as St. Stephan Cathedral. This means that Dominican church was almost empty when I visited. I could take photos and spend my time looking at everything I wanted to. The church was built in the baroque style. The official name of the church is Maria Rotunda but it’s popularly known as the Dominican church. Construction started in the 17th century. The molding, altar and the murals are wonderful to see whilst avoiding the other crowded spots in Vienna.

This was the most expensive apartment that Mozart lived in during his lifetime. Mozart and his family lived in the apartment from 1784 till 1787. The apartment is rather gorgeous inside and remains exactly as it was during Mozart’s occupancy.  I especially liked the gaming room. It was interesting to see what apartments looked like way back when. I used to study music to so seeing the inside where Mozart once lived was unforgettable for me.  The afternoon in Vienna was sweltering and Mozart’s house gave me respite from the cooking sun. You can purchase concert tickets and listen to Mozart’s music inside of the house where he used to host concerts. Tickets start at €39, buy them from the museums official website.  I added the link below. Be aware though that you cannot take photos inside of the apartment. It is strictly prohibited.

The stained glass windows were installed in 1857. The church miraculously survived the bombing during WWII. The Maltese knight order was forced to sell the church during the war. Fortunately   the order could purchase it back after the war ended with the help of a generous donor.  Today there are still a number of attractive art pieces inside of the church. There is a alter painting which dates back to 1730, mason work on the ceiling, a Baroque style organ and the tomb of Jean Parisot de La Valette who victoriously protected Malta against an  Turk invasion.

For lip-smacking food eat at Gasthaus zu den 3 Hacken. This charismatic spot has an outside dining area that adored. I had crumbed chicken and the potatoe salad. After finishing what seemed like a mountain of chicken I stuffed myself with apple strudel. My friend Elian and I spent a lot of time eating in Vienna and I don’t regret it at all. We were drawn in by the pretty outside seating, the service was fantastic so was the food. And the portions were extremely generous.

This exhibition displays authentic furniture from the 1910 era. There are reproductions of Klimt’s most important pieces. Gustav Klimt was a leader of the modern period. His Viennese style of symbolism made him become an internationally recognized painter. His art peaked during his well known Golden Period. The best part of the exhibition is the chance to see paintings such as Hygiea, Die Freundinnen which was  ruined  in addition to restored works like Die Goldene Adele. This is a unique and one of a kind experience which is only available in Vienna.

The Leopold Museum in the Museum quarter is where original Klimt paintings are held.

Vienna’s Opera house is located along the famous Ringstraβe Street. It is undoubtedly one of the most beautiful Opera houses in the world.  My friend Elian and I booked a tour of the Opera house. Both of  us are keen on the theater and have acted in plays. We knew we didn’t have time to see a performance so a opera tour was the next best option. And it blew us away. Not only is the Viennese Opera exquisite , it is elegant with a charming atmosphere even during the day time.

Individuals can simply go to the Opera and book tour tickets. The best part of it is that there aren’t long queues. The tour was narrated in a wonderful way. Our guide was certainly knowledgeable and able to convey the information in a stimulating way. She spoke about the history, the architecture including a room decorated with real gold and so much more.

The Opera House was constructed in 1869. It was designed by Eduard van der Nül and August Sicard von Sicardsburg. It was regrettably damaged during World War II and was repaired and subsequently reopened in 1955. One of the highlights of the tour is that you get to see historical photos of patrons visiting the Opera in Vienna and you can also sit in the Opera seats.

I find it admirable that the Vienna Opera house screens the Opera and Ballet performances on live screens where people can see a live streaming of the shows for free. And also that you purchase standing tickets for shows just before they play for relatively cheap prices. This makes attending the  performances hosted by the Opera house accessible to much more people.

This five star hotel is famous for its culinary speciality, Sachertorte. This is a sweet, chocolate cake with a layer of apricot jam. Many famous people have visited the hotel including: Queen Elizabeth II, John Kennedy, Grace Kelly, John Lennon and Yoko Ono. There was legal battle about who owned the rights to sell the Sachertorte but, that’s a post for another day. I waited in line to have a slice of Sachertorte it wasn’t a long line only three people were ahead of me. The cake was flavourful. The interior of the hotel is elegant. My friend, her then boyfriend and I sat at the bar. The bartender was very approachable. He even spoke in German with my friend Elian who was practicing her German.

Elian and I stumbled across St. Charles along the way to the Museum Quarter. I could immediately see that the building was a church. The church has a enormous cupola. I prefer Baroque and Romantic styled architecture and St. Charles is a marvellous example of Baroque styled buildings.  The church was designed by Johann Bernhard Fischer von Erlach and was completed by his son Joseph Emanuel Fischer von Erlach in 1739.

If you are a classical music enthusiast then head over to St. Charles church concerts which include Mozart’s Requiem and Vivaldi’s Four Seasons. Additionally advent time sees distinctive gospel singing permeating in the church. 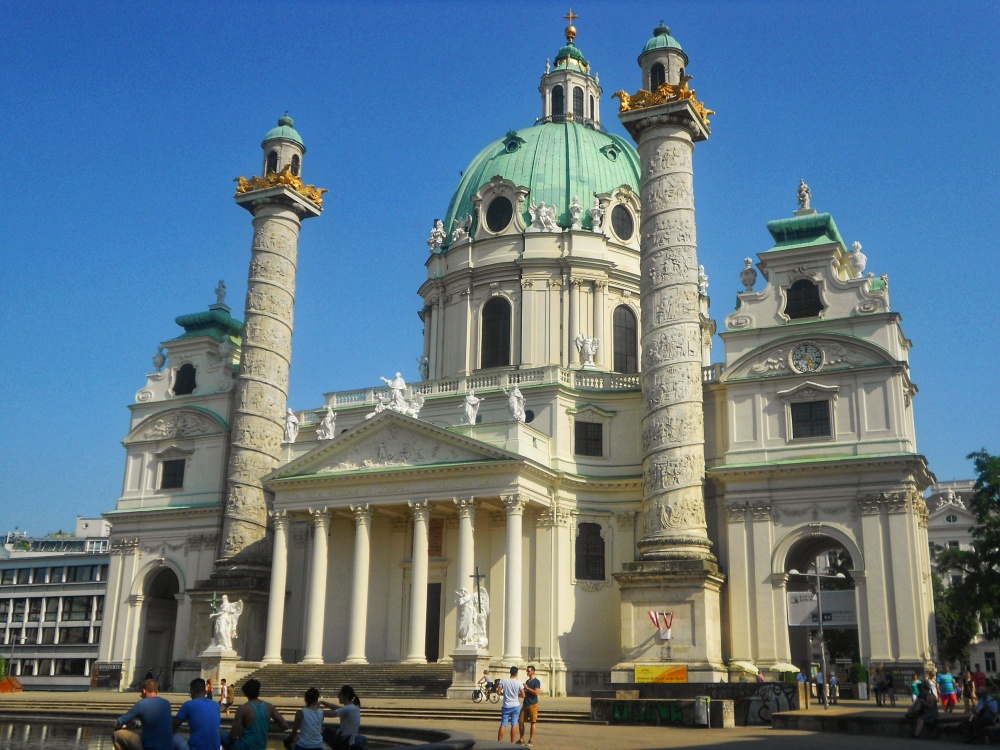 The Ringstrasse boulevard includes many historical buildings including the State Opera, the Museum of Art History, the Museum of Natural History, and the Parliament. Emperor Franz Joseph I who came in to power in 1848 introduced these architectural changes. Different architectural styles through various periods of Vienna’s development can be found along Ringstrasse. You can walk along the street or take the public tram line 1. It was €1 or take a historic tram which costs €8. 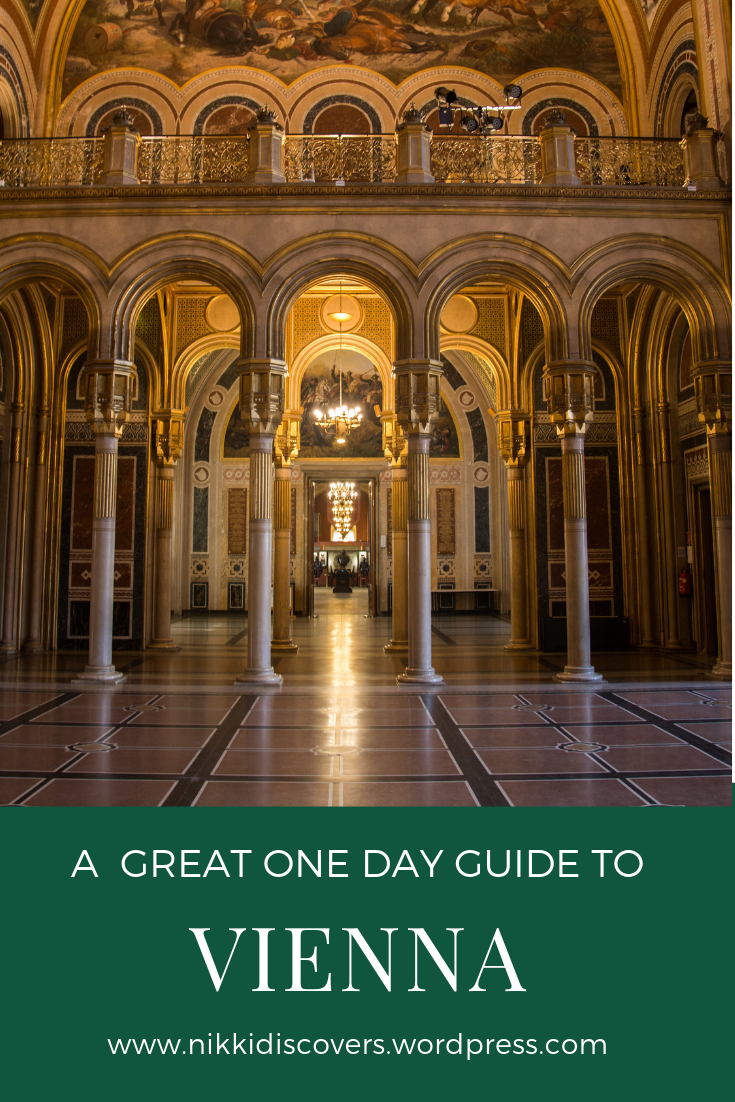 As usual thank you for reading my blog. I appreciate you. Please feel free to comment or chat with me. I would like to know from you if I should add the information after every location. The address and website etc. or do you find it distracting whilst reading?

I will be posting much more Christmas related posts soon as it is the festive season. Hope you are enjoying this time of year as much as I am.